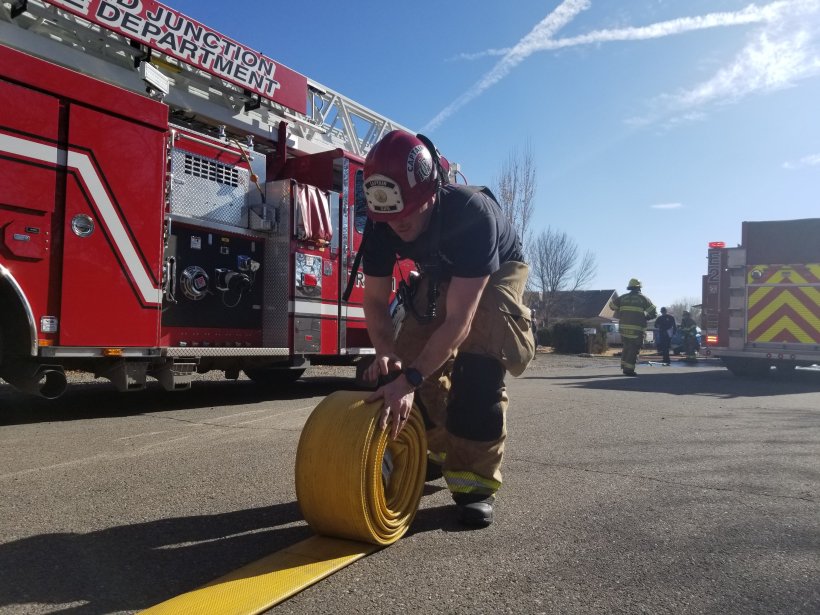 At 12:22 PM Grand Junction Fire Department responded to reports of a house fire in the 200 block of Abraham Avenue. A neighbor called 911 to report smoke coming from the roof of the home.

When crews arrived at the home they found fire in a rear room of the house. No people were inside at the time, but it was later discovered that a dog perished in the fire. Engine 4 went inside the home and quickly extinguished the main fire, while Engine 2 got water from the nearest hydrant, over 600 feet away. Crews continued to work clearing smoke from the home and extinguishing hot spots for over an hour. A family of three is displaced from the home, which had extensive smoke damage and holes cut in the exterior of the home by crews.

GJFD responded with truck 1, engine 2, truck 3, engine 4, ambulance 1, and a Battalion Chief. Mesa County Sheriff’s Office also responded and assisted with traffic control, temporarily shutting down B 1/2 Road where fire hoses extended across the roadway to the nearest hydrant. The origin and cause of the fire are under investigation.

For more information on this incident contact the Community Outreach Office at (970)549-5858 or by e-mail at GJFirePIO@gjcity.org. Let’s be careful out there.